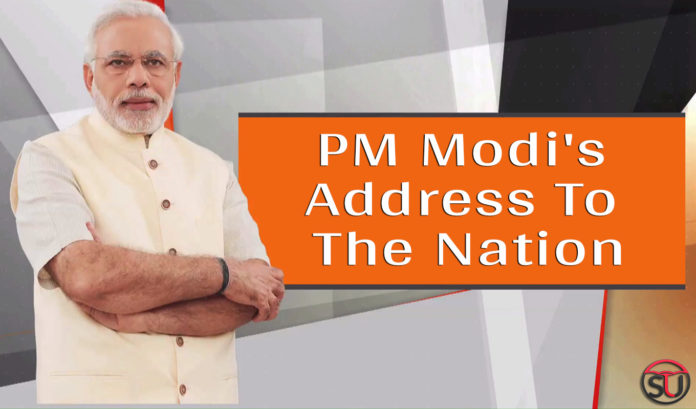 Today after the unlock 1 happened PM Narendra Modi came live for the first time to address the nation. The pandemic has hit India but somewhere India is still in a better condition than many other countries. However, we cannot ignore and be negligent with the precautions.

“In comparison to other countries across the globe, India is still in a very stable situation in the battle against Covid-19. Timely decisions and measures have played a great role,”

In today’s live speech PM Modi address on these issues.

“Ever since Unlock 1 has happened in the country, negligence in personal and social behaviour is also increasing. Earlier, we were very cautious about using a mask, keeping two yards distance, washing hands several times a day for 20 seconds,”

2. During the lockdown and even today when the economy is badly hit, our first priority is to provide food to our farmers and poor people.

“During the lockdown, the top priority of the country was that such a situation does not happen that the stove is not burnt in the house of a poor person. Be it central government, state governments, civil society people, everyone has made every effort that none of our poor brothers and sisters should go hungry in such a big country,”

3. Huge amount of relief fund has been deposited in the bank accounts of over 200 crore poor families.

4. The festivals are about to begin win July which means money, food will be needed. The Gareeb Kalyan Anna Yojana that provided free ration to poor people will be extended till November.

“We have more work during and after the rainy season, mainly in the agriculture sector. There is a slight slowness in other sectors. gradually, the atmosphere of festivals starts to build from July. This time of festivals also increases the needs, the expenses also. Keeping all these things in mind, it has been decided that the Pradhan Mantri Garib Kalyan Anna Yojana should now be extended till Diwali and Chhath Puja, that is, by the end of November,”

5. One Nation One Ration Card will be applied

“We are planning to bring ‘One Nation, One Ration Card’. Now a ration card is also being arranged for the whole of India. The biggest benefit of this will be to those poor colleagues who leave their village and go elsewhere for employment or other needs,”

6. More than Rs 90,000 Crore will be spent in the expansion of Pradhan Mantri Garib Kalyan Anna Yojana.

“More than Rs 90,000 Crore will be spent in the expansion of Pradhan Mantri Garib Kalyan Anna Yojana. And if you add the expenses of the last three months to it, then it becomes almost Rs 1.5 Lakh Crore,”

7. Thanking the taxpayers, Modi said that because of your sincerity and tax payments te poor will be benefitting.

“You have faithfully filled taxes, fulfilled your obligation, so today the poor of the country is able to cope with such a big crisis. I would like to greet every farmer, every taxpayer of the country very heartily, along with every poor person. I bow to them.”

Share
Facebook
Twitter
Pinterest
WhatsApp
Previous article
Original Vs. Fake: Here’s How To Know The Difference Between Real And Fake Beauty Products
Next article
Struggling With Migraine? Add These Superfoods In Your Diet
RELATED ARTICLES
Bollywood