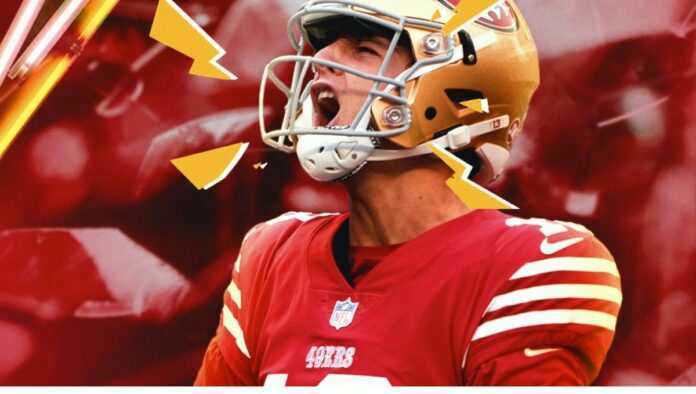 Brock Purdy a rookie NFL star was recognized for his great performance in the past few matches and for booking his name in NFL history.

Back in October, when the San Francisco 49ers were playing against the Kansas City Chiefs quarterback Jimmy Garoppolo was replaced by rookie Brock Purdy. He became the first Mr. Irrelevant to complete the pass during the regular season in NFL history.

Brock Purdy has once again delivered an outrageous performance delivering a winning knock over Tampa Bay Buccaneers by 35-7. The exceptionally outstanding performance of Brock resulted in a one-sided win for the San Francisco 49ers.

The match was organized at Levi stadium and Brocks’ family was cheering up for the 22-year star from the stands. The telecast recorded Brock Purdy’s father getting emotional during his first touchdown pass. This Sunday will always be recognized for the best play by Mr. Irrelevant.

Brock outplayed famous NFL star Tom Brady and knocked by throwing for 185 yards and two touchdowns. Reports say that Brock’s family was evenly excited to watch Tom Brady play as much as they wanted to see Brock playing. The family even booked tickets for the match a while ago so that they do not miss seeing their son play.

The record has accounts more valuable as before Brock, six rookies faced Tom Brady in past and all six failed. Brock was the first ever to outduel Tom Brady in NFL history.

The overall performance of Tom Purdy was exceptional as he completed 16 of 21 passes for 185 yards He scored an NFL Passer Rating of 134.0 which counts as the best quarterback rating out of all seven freshers against Tom Brady.

ESPN shared a video on Twitter showing Brock Purdy’s father bursting into tears after seeing his son outperform and play with such enthusiasm. ESPN captioned the video with “Brock Purdy’s Dad watching his son, what a moment”