HomeBollywoodBollywood Celebrities That Went From 'Fat To Fit'
Bollywood

Bollywood Celebrities That Went From ‘Fat To Fit’ 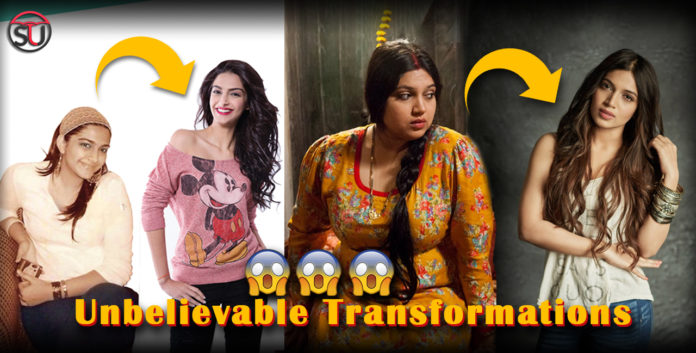 People are often trolled and body shamed for being fat and carrying extra kilos. This just not happens with normal people but many Bollywood celebs have also gone through it. However, they have magically transformed themselves from fat to fit. Incorporating a healthy lifestyle is very important from celebs as well as for normal people.

Actors also get a lot of trolling based on their physical appearance as a curvy figure is not labelled as an ideal figure. The latest fashion trends keep on changing and actors have to keep up with that pace in order to survive in the glamour world.

Everyone has a point when they decide to transform themselves and break the image of being fat. These are some inspirational stories of Bollywood celebs who worked hard and changed their identity by going ‘Fat To Fit’.

Let Us Take A Look At Their Journey Of Transformation

Remember the ‘Dum Laga Ke Haisha’ actress who played the role of a fat woman, but how stunning she looked in her next movie ‘Toilet Ek Prem Katha’. She followed a strict diet plan and exhausting workout routine and lost 21 kgs in just 4 months.

The ‘Khoobsoorat’ girl was not as “perfect” as she looks now. She lost 35 kgs in 2 months for her Bollywood debut in the film ‘Saawariya’. The actress revealed that her mother helped her a lot during the weight loss journey.

“In all fairness, it was my mother who helped me get rid of my excess weight. The first thing she did was to keep me off the stuff I was so fond of as a teenager- chocolates, ice creams, fried foods and sweets.”

The Ishaqzaade actress went from size 38 to 30 and turned from fat to fit. The chirpy and bindaas girl of Bollywood decides to lose her extra flab and transforming into a hot diva. She went on a strict diet plan for six months that made her stay away from sugar, carbs, junk food and oily foods.

The zero figure actress was not a perfect figure hottie back then. She revealed how she lost weight for the movie ‘Tashan’ and said

“The size zero phase was a result of a combination of yoga and Rujuta’s meal plan. I was 68 kilos, and she brought me to down 48, which is when I gave that bikini shot for Tashan. I took up that project as a challenge.

The handsome actor of Bollywood was not as he is now. His fitness involved a lot of dedication and sacrifices he made from getting into the shape he has now. The macho man weighed 140 before his Bollywood debut but eventually dropped down to 87. He followed the best diet for good health and achieved his fitness goal.

The Dabanng actress made her debut with Salman Khan and looked stunning with her curvy figure. However, the people still labelled her as ‘fat’. She lost 30 kgs for her first Bollywood break in Dabangg and went from weighing 90kg to 60 kgs.

The Yuvraaj actress was always criticized for her extra kilos and even faced the scrutinized media for it. After her Bollywood debut in Veer where she weighed 100 kgs, she decided to take up the challenge. Going through a major transformation she touched 55 kgs.

Adnan Sami is known for his magical voice and we can’t thank him enough for the song ‘Yeh Zameen Ruk Jaye’. But he faced serious health problems due to his weight. He used to move on a customized wheelchair as he weighed 206 kgs back then. However, he realized the risk of being overweight and dropped 130 kgs.

Feel inspired with these transformational stories?