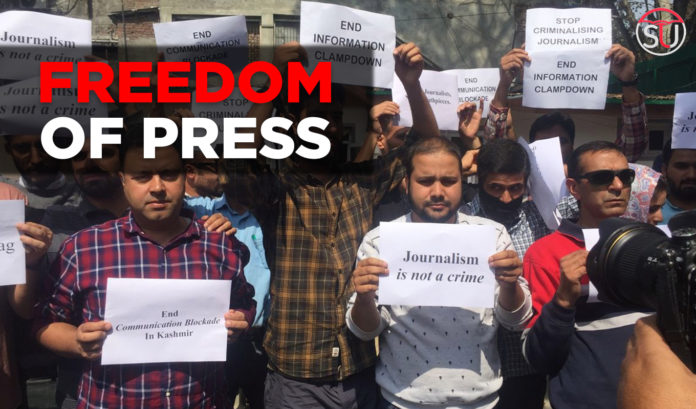 India is considered a dangerous country for Journalists and is classified as “bad” according to World Press Freedom index published by “Reporters Without Borders (RSF)”, an International Journalism not-for profit body. It has placed India at 142nd rank, it has shown no improvement, last year also it was at the same position. The index is made every year by RSF.

The latest index released on 20th April, it ranked 180 countries, the index is topped by Norway, followed by Finland and Denmark at 2nd and 3rd positions and Eritrea is at the bottom, if we see India’s neighbours . China is ranked at 177, Nepal is at 106, Sri Lanka at 127, Myanmar at 140, Pakistan and Bangladesh are also worst performers ranked at 145 and 152 respectively. India shares its ranking and “bad” classification with Brazil, Mexico and Russia.

The reason for labelling India as bad for Journalism has been attributed to intimidating Environment which is created by BJP supporters , any journalist who dared to speak anything about these politicians of BJP or the supporters of Hindutva Ideology are marked as “anti-national or anti-state”. The condition of Journalists is worsening here. Thus India is considered as a dangerous country for the journalists trying to do their work properly.

Environment is not all safe in India for media people, it is daunting for them. The report further held Modi Government responsible for harmful conditions for journalists. It has put undue pressure on reporters and journalists. They are “exposed to every kinds of attack, including police violence against reporters, ambushes by political activists and reprisals instigated by criminal groups or corrupt local officials”.

Indian Government has restricted its media to report anything related to covid 19 outbreak, it has troubled and disturbed journalists a lot in doing their work in a proper way. There were extremely violent and hate campaigns on social media against those journalists who said anything about Hindutva Followers or BJP and even threatened to be murdered. And four journalists have already been in connection to their work in 2020.

In our Nation , stringent new IT rules has devastated the condition further, which controls content on digital news media platform, it is trying to hinder the freedom more by suppressing such information which are important especially about corona situation. Such rules are widely criticized by RSF for posing an “impediment  to a thriving digital news media space”.

The Government had taken undue advantage by continuously accusing journalists of writing any content which is not accepted by officials. It took the advantage of Pandemic condition to control the freedom of Press. It further observed that situation in Kashmir is still in menace as journalists are continued to be harassed by police and cops which is due to “utterly Orwellian content regulations”.

The report further emphasized on the restriction of freedom of expression on social media and particularly highlighted about the “arbitrary nature of Twitter’s algorithms also resulted in brutal censorship.” It stated that when Twitter was filled with complaints made by the “ troll armies about The Kashmir Walla magazine, twitter just suspended its account suddenly without any possibility of appeal”.

With so much violence and unfavorable environment created against media in India, it is obvious that India’s ranking has to be affected, lets try to make the atmosphere congenial for them. After all these are the only people who even risk their lives just to give us the right information. Social media is the biggest platform now a days for the freedom of expression so let’s not restrict journalists or reporters freedom by imposing unnecessary rules. We should stop such violent campaigns and  harsh public condemnation against them as they are working somehow for enhancing our safety only. Lastly Our nation is considered about these low rankings and is working on improvement