HomeInspirationTeacher's Day Special: 5 Teachers Who Broke All Stereotypes And Dedicated Their...
Inspiration

Teacher’s Day Special: 5 Teachers Who Broke All Stereotypes And Dedicated Their Lives To Teaching 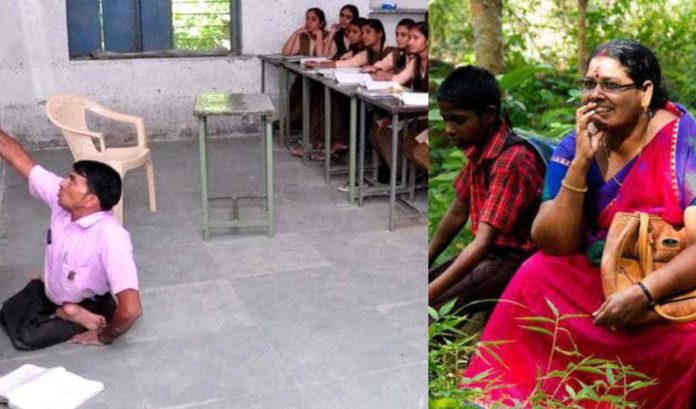 Teachers have the power to change anybody’s life through the vast treasure of knowledge they have. The knowledge you possess today is what you got from your teachers. Their area lot of things which we are indebted to that are given by our teachers. Our school life has played a major role in disciplining our life. In short, our first grooming session started from school and teachers were the ones who made it possible.

Today is 5th September, ‘Teacher’s Day’. As we all know that Teacher’s Day is celebrated to honour Dr Sarvepalli Radhakrishnan on his birth anniversary. He was born on September 5, 1888.

Dr Sarvepalli Radhakrishnan was the first Vice President and second President of India. He became the second president in 1966 and since that day 5th September has been celebrated as Teacher’s Day.

Since the day is celebrated and dedicated to teachers, let us take a moment to appreciate these teachers who have broken all stereotypes and dedicatedly educated people.

Let’s go through the dedicated gems of teaching we have:

1. Sanjay Sen Who Proved That Physical Disability Cannot Stop You From Anything

Determination and self-confidence can drive you through many rough paths. Sanjay Sen is an example of true passion and commitment. Despite his physical disabilities, Sanjay has been serving in the Shiksha Sambal Project since 2009.

Meet Sanjay Sen, a physically challenged man, teaching at a village school in Rajasthan under the Shiksha Sambal Project since 2009…salute for his dedication.👏#Respect 🙏 pic.twitter.com/GuBU8wdjqJ

2. KR Ushakumari Who Proved Distance Is Nothing

Teachers tend to go beyond for their students as their motive to provide education is very clear. KR Ushakumar set the bar by travelling through the 8km dense forests daily to teach Kunnathumala tribal kids of Kerala.

Ushakumari crosses the dense forest that has leopards, wild boars, elephants and tigers. But this does not stop her from reaching the school. She hides behind the bushes to safeguard herself but makes it to the school daily.

3. Rajesh Kumar Sharma Who Does Not Need A School To Teach

Rajesh Kumar Sharma is proudly known as ‘Masterji’ and has been educating the children of the slums under a metro bridge. Rajesh dedicatedly takes the classes to educate slum children under the Yamuna Bank Metro Depot in Delhi. He has named this initiative as “Free School: Under the Bridge”. Sharma told to Hindustan Times –

“Back in 1989, I had to drop out after the first year of college in Aligarh due to worsening financial condition of my family. When I passed out of class 12 in the science stream, I too dreamt of becoming an engineer. That unfulfilled dream has turned into this school.”

Ajay Bahadur Singh, a 47-year old man who took the initiative to give free education to all Medical Aspirants. Ajay established ‘Zindagi Foundation’ in 2017 for the ones who couldn’t afford expensive medical entrance coachings.

In the very first year, 12 out of 18 students from his foundation got admission in the medical colleges of Odisha.

Midday blues can lead to laziness, to keep his students engaged Prafulla found out an entertaining way to deliver knowledge to kids. Prafulla Kumar Pathi is a headmaster of an upper primary school in Odisha in the Koraput district. Prafulla is popular knows a ‘Dancing Sir’ by his students.

He dances and enjoys his profession and even makes his students follow his steps.

These teachers have passionately followed their profession. They have taken challenges but never gave up on spreading knowledge.

Happy Teacher’s Day to All of them and who believe that education is for all.

International Day of Education 2023: “To Invest in People, Prioritize Education”