HomeViralPic Of Overflowing Cheese From Bagel Goes Viral, Twitter Asks About This...
Viral

Pic Of Overflowing Cheese From Bagel Goes Viral, Twitter Asks About This ‘McMonstrosity’ 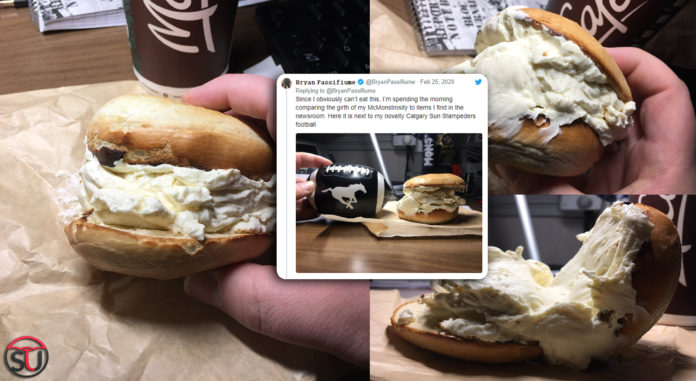 We have our own taste and choices that we keep in mind while ordering food at restaurants. Sometimes we might demand extra toppings, extra cheese or subtraction of certain items.

Little do we know that our customization could create such a disaster. A Twitter user named @BryanPassifiume posted a picture of ‘McMonstrosuty’ that he came across while ordering his regular Bagel.

The Bagel that he used to order quite often give him a gastronomical disaster. Mcdonalds served Bagel to this man in which the cheese was overflowing.

More photos of this monstrosity. I ordered extra cream cheese as they usually just apply it like butter, but this is clearly just an exercise in passive-aggressiveness. How do I possibly eat this? pic.twitter.com/XM70yMrnqp

He even shared a 360° video of the bagel that clearly showed the overflowing cheese.

The man took it to Twitter and compared it with funny things.

Since I obviously can’t eat this, I’m spending the morning comparing the girth of my McMonstrosity to items I find in the newsroom. Here it is next to my novelty Calgary Sun Stampeders football pic.twitter.com/pawjJSyrpk

Here it is next to the Toronto Raptors logo on @TheEddieChau’s hat pic.twitter.com/TGfR7j6FXl

Twitter went crazy and reposted his tweets. Netizens are asking about this ‘McMonstrosity’.

Here Are Some Hilarious Reply People Posted On His Tweet

This is the content I am here for. Thank you.

Were you afraid they used scream cheese instead? pic.twitter.com/Pm7nvAeOsf

What is wrong with them?

Wow!!!!! I can’t believe this. How can they load up cheese like that!