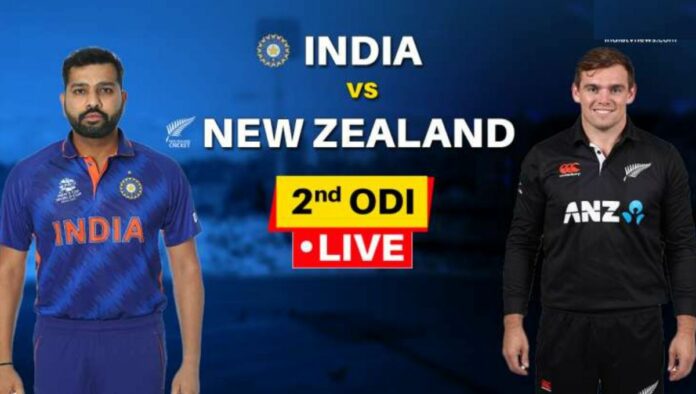 India is facing New Zealand in the 2nd ODI match of the series. The match is being held in Raipur. Indian captain Rohit Sharma won the toss and chose to field and now his decision turns out in the team’s favor. New Zealand batsmen couldn’t manage to face the excellent bowling form of the team India as they lost all the wickets in just 34.3 overs.

A funny incident took place as Rohit Sharma got confused after winning the toss and he wasn’t able to recall his decision to bat or bowl:

New Zealand came to bat first but seems like their batting tenure wasn’t able to withstand the strong blow of Indian bowling masters. Indian bowler Shami has taken down three Kiwi batsman and the other three wickets were taken by Siraj, Shardul and Hardik Pandya.

However, Kiwi batsmen Glenn Phillips is playing near to his half-century with Mitchell Santner on the other end. Hopefully, these two players might revive the scope for their team. The current score: NZ is 108 (all out).

India opened with no trouble at all as they were relieved due to the target score. Rohit Sharma and Shubhman Gill started the inning and almost to the end, but then Rohit Sharma got out just after his half century. Rohit got out after scoring 51(50).

Virat Kohli came in after this and the team was leading towards a sweet victory. However, Virat didn’t participate for long as he got after making 11(9). Ishan Kishan makes the entrance and leads the team to victory with support from Shubhman Gill, who scored 40(53).

Ind vs NZ 2nd ODI has turned out as an exhibition for memes as New Zeland’s batting order has fallen. Here are a few memes that are going viral on social media platforms: