During a match on Monday between Rajasthan Royals Vs Kings XI Punjab, Ashwin noticed that Buttler was heading out of his crease before the ball was even delivered, so he decided to stop in his action and removed the bails before lodging the appeal. 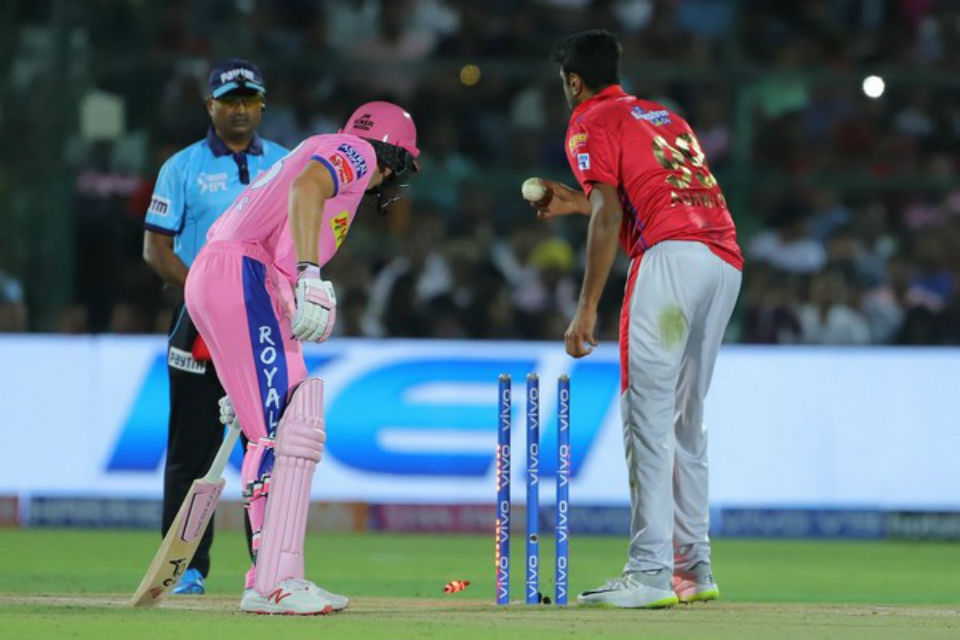 The decision was then sent to the third umpire who decided to send Jos Butler back to the pavilion as he was out.

This decision of Ashwin to dismiss Butler was displeased by the social media and faced many current and former players expressed their anger.

Shane Warne on his Twitter Account wrote, “So disappointed in @ashwinravi99 as a Captain & as a person. All captains sign the #IPL wall & agree to play in the spirit of the game. RA had no intention of delivering the ball – so it should have been called a dead ball. Over to u BCCI – this a not a good look for the #IPL.”

He added saying, “As Captain of your side – you set the standard of the way the team wants to play & what the team stands for! Why do such a disgraceful & low act like that tonight? You must live with yourself & FYI – it’s too late to say sorry Mr Ashwin. You will be remembered for that low act.” 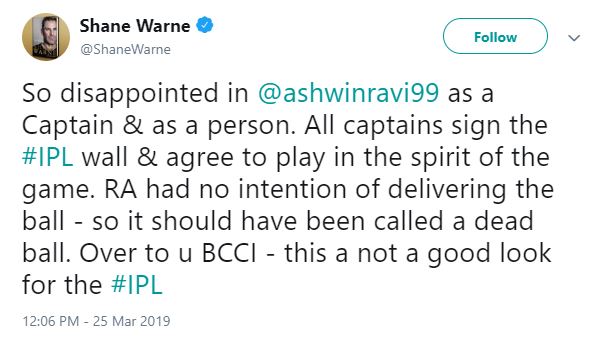 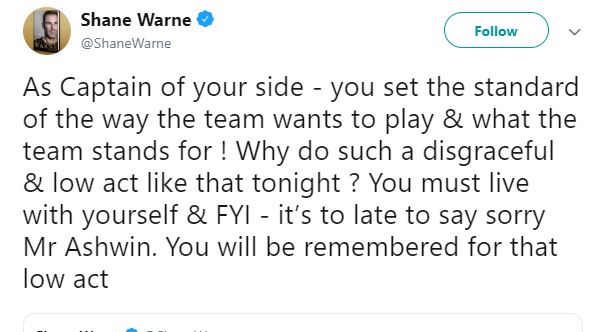 Also, Eoin Morgan wrote on his Twitter account, “I cannot believe what I am seeing!! @IPL Terrible example to set for young kids coming through. In time I think Ashwin will regret that.”

Cricinfo’s editor-in-chiefSambit Bal tweeted, “I never had a problem with bowlers running non-strikers out if they stray out of the crease before the ball is bowled; the question, in this case, would be if Ashwin waited for Buttler to get out of the crease.” 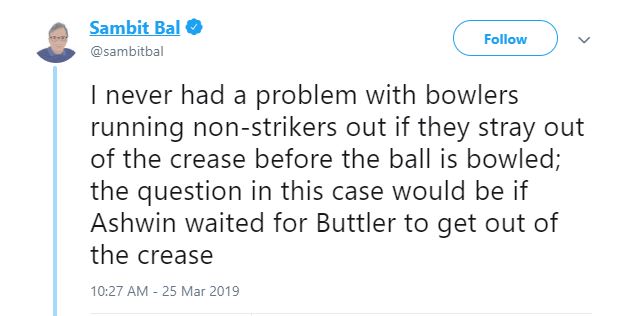 Scott Styris, former Kiwi cricketer tweeted, “My opinion on the Buttler/Ashwin controversy is that it’s NOT Buttler’s fault and it’s NOT Ashwins fault either. Ashwin is entitled to appeal. I thought the TV umpire made an incorrect decision. Should have been a dead ball….. play on.” 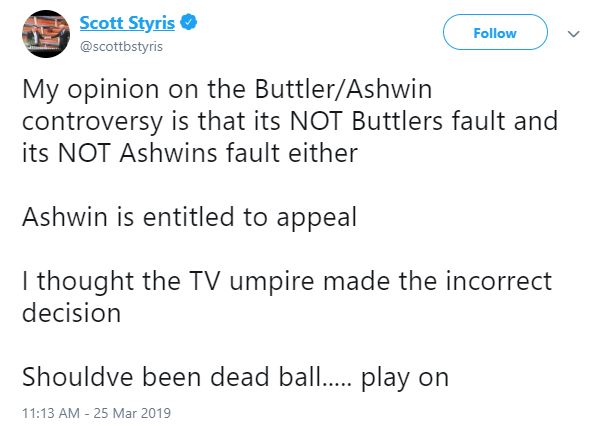 Former England captain Michael Vaughan wrote that Ashwin was completely out-of-order and he also questioned whether people would support the bowler if Virat Kohli would have been the batsman or was dismissed the same way.

Vaughan tweeted, “If @josbuttler had been warned well that’s fine … if he hasn’t and it’s the first time I think @ashwinravi99 is completely out of order … watch how often this happens from now on !!!!!!! #IPL.”

He added saying, “I would say to all India ex-players/Pundits who are supportive of what R Ashwin did … If @imVkohli was Batting would you be so supportive !!??? #NightAll #IPL #OnON.”

However, the cricket commentator Harsha Bhogle was seen promoting the law of the game and said Ashwin was not beyond his rights to dismiss the batsman.

In his tweets, he said, “Lots of drama on the Buttler run-out. He was livid but the law and the advisory on it is clear. The bowler is within his right to run a player out at the non-striker’s end if he is out of his crease.”

“I am hearing a lot of talk about the spirit of the game. This law specifically came in because taking recourse to this very “spirit of the game” batsmen were running 6 inches less to complete a run.”

Butler was hitting the Punjab bowlers all around the park while chasing the target of 185 runs, but after his dismissed, Rajasthan Royals tumbled from 108/1 to 170/9 and hence lost the match by 14 odd runs.

This Former Indian Captain Named Captain of Australia’s Team Of The Decade!

The ultimate champions of cricket, the team who were...
0
Read more
Sports

Celebrating Ricky Ponting’s Birthday, Here Are Some Mind-Blowing facts About Him!

On His Birthday, Let’s Get To Know Some Of The Lesser Known Facts About Yuvraj Singh!

The man of wonders, the one without whom the...
0
Read more