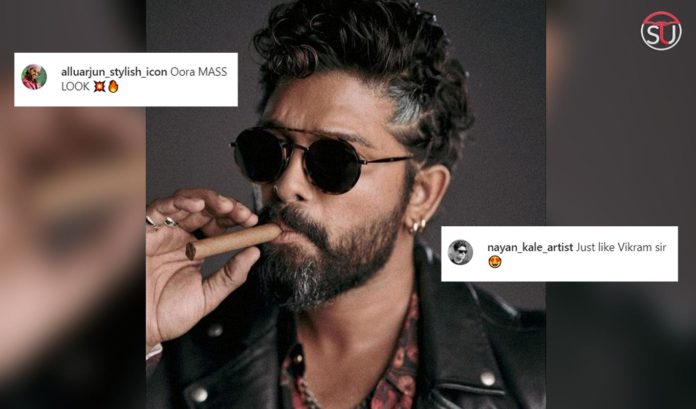 Pushpa: The Rise fame Allu Arjun made a jaw-dropping appearance on social media with his latest photoshoot. Even his co-star Rashmika Mandanna could not recognize his recent look. The 40-year-old actor wore a black leather jacket, and sunglasses, and holding a cigar in his hand.

The actor captioned a black heart to the photo he shared on Twitter. Whosoever saw Allu Arjun’s photos could not believe it really him. We bet even his fans won’t be able to recognize Allu.

My god! 🔥 @alluarjun .. I couldn’t recognise you there for a second sir 😄🔥

Is Allu Arjun’s Latest Look for Pushpa The Rule?

Let us tell you the reality of Allu Arjun’s latest photoshoot. He collaborated with director Harish Shankar for a commercial. His new avatar was for the ad and not Pushpa The Rule.

Well, the first part of Pushpa’s movie was so brilliant that fans can never forget his style, dialogue, and dance moves for years to come.

The movie became one of the highest-grossing Telugu films and collect the US $46 million at the box office.

For the next part, fans won’t have to wait longer as the movie is in making. If we go by the rumors, Pushpa The Rule will hit theatres by the end of 2022 in December.

However, there is no update on the release date of the movie. Pushpa The Rule will have same cast- Allu Arjun, Rashmika Mandanna, Fahadh Faasil, and many more.

Unlike Pushpa The Rise, the second part may be released in multiple languages seeing the popularity of the movie. It may release in five languages-Telugu, Tamil, Hindi, Malayalam, and Kannada.